Publish and be damned!

Lockdown sucked, but it did lead to some productivity ...
We finally managed to wrestle the energies of the seven-headed beast that is 7-ON, and focus on compiling a new anthology. 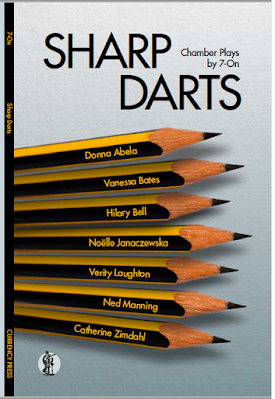 Past 7-ON anthologies include Short Circuit* and No Nudity, Weapons or Naked Flames. The former (Currency Press, 2009) is a collection of shorts-before-the-feature, initiated by Griffin Theatre Company over a season. The book includes works by seven other stellar writers inspired by the four seasons and the three Fates. No Nudity, Weapons or Naked Flames (Federation Press, 2012), taking its title from a directive to HSC drama teachers, features 21 monologues for actors. It includes notes for students, and has proven to be an invaluable addition to school libraries and classrooms.
So, what next? We decided to collate our favourite, unpublished ‘chamber plays’: short pieces, without the strictures of cast-size or page numbers. Initially the plays were to be drawn from our many and varied 7-ON collaborations. These are ambitious, sprawling epics, exploring ideas ranging from Nietzsche to friendship, from Sydney’s slithery underworld to Ghandi’s ‘social sins’. But then we thought, "Stuff it. Let’s just choose our best". We went to our back-catalogues for beloved plays from the multitude of projects with which we’ve been involved over the decades, individually or together, some produced, some not (yet). And that’s what we’re offering in ...

SHARP DARTS: CHAMBER PLAYS BY 7-ON

Other than capping each writer at 15 pages, the only thing that unites these works is that we love them, and are proud of them. Reading over the proofs, I (Hilary) am struck by the way in which the spirit of these writers, my colleagues and friends, is so deftly expressed in the small allowance of space. Whether it’s a deep-seated thematic obsession, a way with words, a bizarre view of the world, a sense of humour ... our essential selves are captured and turned into theatre.
We have always maintained, since founding 7-ON, that we would resist homogeneity for unity's sake, and in fact actively work against it while still collaborating on group projects. Nowhere is this clearer than in our new anthology. I can’t help but think that, in these most divided of times we’re living in, 7-ON has something to share about working together while remaining fiercely, weirdly, happily individual.
We’ll be charting the progress of the new book here over the coming weeks. Look out for excerpts, interviews, pictures and musings as we count down towards the launch date... 19 MAY 2021.

*NB: There's no link to Short Circuit as it's now a collector's item! But the book is in over 30 libraries around the country, AND we have them for sale, so get in touch if you want a copy.
Posted by 7-ON at 13:10